by Fox Finances
in Market Research
0 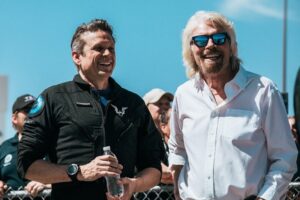 “Space flight needs leaders who go beyond where they can’t see, into the unknown, pushing the envelope for what might be possible. They are not satisfied staying within the box or looking within their own horizon.” – Mark “Forger” Stucky (former Virgin Galactic lead test pilot).

Look Beyond The Horizon To Be Future-Fit

There is much that tech executive leaders can learn from the trials and tribulations of the new commercial space race. When it comes to leading and innovating in the face of adversity, the stories behind Virgin Galactic, Blue Origin and SpaceX are inspiring for what can be achieved with vision, ambition, and sheer hard work. Each company’s origins were built on creativity, adaptiveness, and resilience as they faced high risks, test failures and financial setbacks on the journey to forging a new reality of commercial space travel. It shows us that innovation truly results from hard work, not luck.

The book “Test Gods: Virgin Galactic and the Making of a Modern Astronaut” by Nicholas Schmidle, tells the inside story of Virgin Galactic’s early days from the experiences of former lead test pilot and director of flight test, Mark “Forger” Stucky. Schmidle also recounts Stucky’s life – from starry-eyed youth to NASA, the Air Force, and Virgin Galactic; and through dozens of grueling test flights to his first successful trip beyond the earth’s atmosphere – From “Test God” to modern astronaut. Forger shared his story with unique perspectives on leadership and innovation at the Forrester Tech & Innovation forums this year (for both North America and EMEA). As Stucky says “space flight needs leaders who push the envelope for what might be possible”, but all leaders must look beyond the horizon to ensure their organization is future fit.

The Test Gods Tips For Pushing Your Leadership Envelope

The “Test Gods” book describes a world where “the line between lunacy and genius is blurred, and where no sacrifice is too great in pursuit of the dream of space travel”. And it is also a story of people seeking to innovate, collaborate and test new ideas while overcoming setback after setback. Business success in such an environment needs strong leadership, not just at the top but across all layers and areas of the organization. Future-Fit leaders can adapt this learning to: