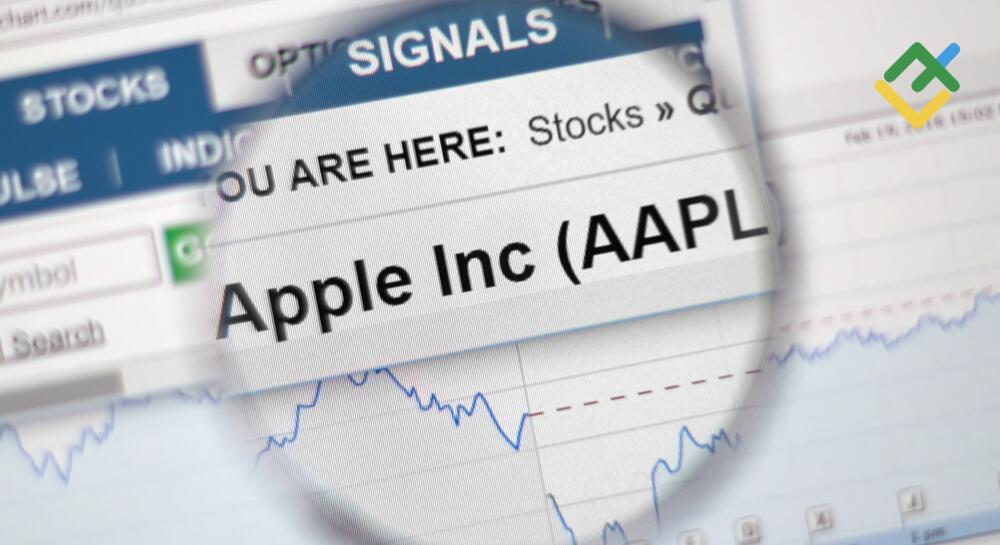 Apple stock price forecast seems to be on a lot of investors’ minds – over the last few years, it has been one of the top stocks to trade. While many agree that Apple has good revenue growth prospects, reflecting its long-term sustainable competitive advantages, there is a lot to talk about.

The article covers the following subjects:

In this article, we’re presenting Apple stock projections based on historical probability and fundamental analyses from renowned publications.

To keep this section brief, we’re going to focus on the AAPL stock performance for the last 5 years.

In November 2017, Apple announced financial results for its fiscal year. It was clear that the company was doing well, with quarterly revenue of $52.6 billion and a double-digit earnings growth.

However, when Apple unveiled a new lineup of products in September 2018, the excitement they generated wasn’t translating into sales. Analysts were worried that Apple’s high prices could leave it exposed if the economy soured. Clearly, the selling price trend couldn’t continue forever.

In 2019, the stock performance was on the rise, and this movement continued well into 2020. The company’s 4-for-1 split took effect on August 31 of the past year, which caused a 40% soar in value, giving the company a staggering $2.3 trillion market cap. This event quickly ran out of gas, and the fall has been steep. The stock eventually recovered – you can see how it played out on the chart.

Apple’s stock opened at $69.35 on March 11, 2020 – the date when the World Health Organization announced that COVID-19 had reached pandemic status. Since then, AAPL shares have risen by more than 70%, and a single share is now trading at $149.56. More on the current trend in the next section.

How Is Apple Stock Performing Today?

Below you can see the chart with the AAPL current price.

AAPL’s share price is down more than 9% for the year, trailing the S&P 500 by almost 11%. This behavior might have little to do with the broader giant trends than it does with the particular dynamics of the company. Apple has also underperformed the Nasdaq 100 and the rest of the tech megacaps.

However, the bulls are still excited and call this stock undervalued, viewing the recent weakness as a buying opportunity. This will be evident from analyst recommendations down below.

What is the forecast for apple stock for 2021: Experts on Apple

A number of publications and experts are expressing their views on the AAPL share price for this year. We decided to cover five of the most prominent analysts that can tell the difference between overvalued and undervalued stocks.

What are the experts predicting for apple stock? Here are quick summaries for each Apple Stock Market Predictions:

Finally, according to Wallet Investor, the AAPL price might reach $154 by the end of next year. Overall, this outlook goes in line with experts’ opinions that are all making a bull case for this asset.

Apple’s bullish trend has been developing since 2003, as Apple stock’s monthly price prediction chart above suggests.

Six trend development stages can be singled out there, each of them being shorter than the previous one. So, the ultimate sixth stage must be shorter than the fifth one, and Apple’s future price might follow a bearish trend in 2022.

The first growth stage of the AAPL ticker started in 2003. One share price was less than 0.5 US dollars at that time. A correction that occurred in the crisis year 2008 completed that trend stage.

As the Apple value will hardly pull back to those levels, we will focus our technical analysis on the fourth and fifth stages to make a realistic forecast.

The trends of those two stages are marked with the blue lines in the Apple to USD price prediction chart above. They serve as a basis for drawing Fibonacci channels.

The AAPL ticker failed to break through the projection line of 100% of the fourth stage’s grid. At the same time, the stock is trading in the consolidation zone between Fibo levels of 38.2% and 61.8% of the fifth stage’s trend. Overlaying the level of 100% of the first grid and 61.8% of the second grid will create powerful resistance to growth and point to a high bearish potential.

Let’s check the forecast above on smaller time frames.

The weekly chart above shows Apple’s price history. The seller’s reaction to the level of 160 USD was quite strong. At the same time, the RSI  has been in the overbought area for a long time and is directed down.

The MACD confirms Apple stock’s projected fall. There’s a classical bearish divergence between its MAs and the price chart. So, the technical analysis of the weekly chart indicates that a forecast for the next three months generally complies with the global picture shown on the monthly chart.

A downward consolidation will most likely form in the nearest two months. A strong support level is located at around 140 – 150 USD. If the market sentiment doesn’t change, the trading range formed will be broken to the downside with a target of 130 US dollars.

To conclude, let’s make a long-term forecast for Apple’s shares.

In general, it coincides with the scenario outlined on the monthly chart. We might see a drawdown to 130 USD before the end of the year. Then, the Apple stock price might pull back to 150 USD.

That pattern was realized in 2020 and the first half of 2021, so it’s highly likely to repeat itself.

Whether or not the maximums will be updated is a pending question. As the market is overheated and strong resistance levels are accumulated at around 160 USD, a zigzag correction is more likely to happen than an update of historical highs.

Apple stock’s support levels are accumulated at 103 and 116 USD. The angle at which the price retraces from those levels will show the buyer’s true strength. However, the AAPL expected trading range is unlikely to move beyond 100 and 160 USD.

Monthly price expectations are presented in the table below.

Here’s a long-term trading plan based on the technical analysis we have done.

Since Apple’s expected potential is bearish, our main objective should be exploiting short trades.

The first price target will be at around 135 USD. You can close half the position there and move Stop Loss to a breakeven zone.

Remember to manage risks and avoid losses per trade exceeding 1% of the deposit.

The Apple share price forecast for 2022 starts off on a negative note. In some ways, it goes against what analysts have said about 2021. Still, it’s important to share the figures based on historical data. Around July, the situation evens out and switches to an uptrend move, going all the way to a 25% increase by December (compared to USD 121.42 as of March 5).

In the Apple stock price prediction for 2023, the value increase is modest but consistent. The average rate for the year fluctuates between $128 and $148. For more details, please refer to the table below.

Going into the 2025 Apple share price forecast, we can see optimistic estimates. Bear in mind that with such long-term prognostications, the figures are approximate – the company and the market may not take the direction we expect.

By 2030, the stock price may reach as much as $428-$438, according to Coin Price Forecast. Once again, earnings expectations may not be accurate. But, at the very least, it gives you an overall idea of the price direction.

How Apple Stock Performed Over the Years

Any stock predictions, AAPL shares included, consider historical volatility as an acceptable basis to infer the future price. This is why we’ll be doing an overview of the AAPL price history.

Are Apple Stocks Worth Investing In?

Apple Inc, a component of major US indices, is the world’s most valuable tech company (market cap: 2.038T dollars, Bloomberg). It has evolved into a funnel for technological innovation and boasts strong leadership, incredibly deep pockets, and one of the most influential brand names in the world. This perspective alone makes Apple a solid choice for long-term investors.

Also, we encourage you to look beyond investing. Active traders can find positions that have the best short-term movement to take advantage of on a daily basis. There is no need to wait years for profitable deals.

Now that you’re armed with knowledge and resources, LiteForex gives you the chance to make a living by stock trading. To start off, sign up for a demo account and practice risk-free. When you’re ready to hit the market, switch to real trading and join the ranks of successful traders!

The content of this article reflects the author’s opinion and does not necessarily reflect the official position of LiteForex. The material published on this page is provided for informational purposes only and should not be considered as the provision of investment advice for the purposes of Directive 2004/39/EC.